Pot lista presents MC Abdominal: You just have to dig a bit deeper sometimes to find the good stuff!

Andy Bernstein is better know by his stage name Abdominal. He’s a great MC and an even greater guy! Pot Lista proudly presents a little Q and A with one of hip hop’s overlooked artist who’s love for wordplay is matched only by his love for chicken wings. And women. And dogs. And bicycles.

When and how did you start getting into hip hop and rapping?
I first started listening to hip-hop back in the late ’80s (Run-DMC‘s “Raising Hell” was the first rap cassette I ever bought). I was an avid skateboarder, and a mix of punk & hip-hop was what most skaters in Toronto were listening to at the time. Eventually I kind of gravitated over more to the hip-hop side of things, and started experimenting with writing my own little raps. A fellow TO skater, Dave Yan (aka DJ Serious) bought some DJ gear + a little sampler in ’93, and we started trying to make some music of our own.

What was the Canada/Toronto hip hop scene like then and how’s it looking now?
Well, like everywhere, it was very different because there was no internet. Toronto is fairly spread out geographically, so to know what other groups and crews were up to musically back then, you had to actually go to live shows. So there was much more of a stress on live performance then as compared to now (where net presence rules all!). Also, these days, things feel a lot more serious. With Drake‘s success (love him or hate him), people in Toronto are now realizing they can actually really succeed and make a lot of money at this music thing, so stakes feel a lot higher. As a result, the scene’s maybe not quite so innocent and fun-loving as it was a few decades ago.

What can you tell us about working with Len? And what the heck are they up to now?
Well, the whole Len connection came about because of my involvement with the Cryptic Souls Crew (see question below). My buddy Phil, aka ‘Planet Pea’, who was one of the founding members of CSC, also ended up being in Len. So he acted as the middle man between Len and some of the members of CSC (we did a sort of ‘posse cut’ on one of their albums, that was actually called “Cryptic Souls Crew”). Far as what they’re up to now, Pea’s living in NYC with his girlfriend, doing graphic design, D-Rock‘s still in Toronto, making music, and I think Mark and his sister are still actually doing the Len thing. They just dropped this tune/video a few months ago in fact…

What’s the story behind the Cryptic Souls Crew?
CSC was just a crew/collective of Toronto rappers, DJs, producers, bboys, and writers who all came together in the mid to late ’90s. 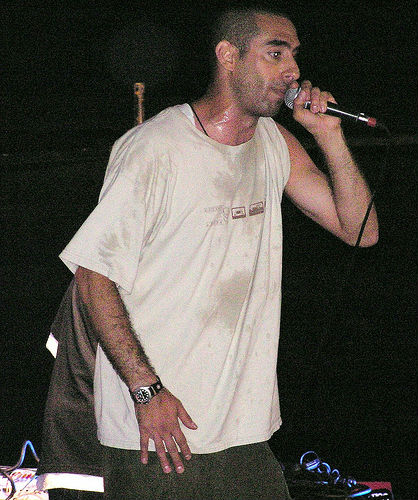 You usually put out albums with other people (DJ Fase, DJ Format, the Obliques) but in 2007 you put out Escape From The Pigeon Hole under solely your name. You still had guest appearances from Format and Young Einstein how come it was ‘only’ an Abdominal album? Do you ever do any production?
Well, ‘Escape’ was just under my name only because I was working with so many different producers on it (in addition to Format and Einstein, there were also tracks by Cut Chemist, Fase, and Bird, among others). And no, I don’t do any production…strictly a lyrics man!

Is that really the mayor of Toronto on “T. Ode” and if yes how’d you pull that off?
Yeah, it really is the ex-mayor, David Miller. We (Notes to Self, who are also on the tune, and myself) were asked to perform “T.Ode” at a ‘celebrate Toronto’ type of event. Mayor Miller was scheduled to speak right after our performance, so we crossed paths as we were exiting and he was coming onto the stage. He stopped, shook my hand, and told me he really liked the song. So I asked him if he’d be willing to record a little intro for it. He said sure and told me to speak with his assistant to set it up. I did, and sure enough, he left the message that you hear at the beginning of the tune on my phone a week later!

What’s the point of the title “Escape From The Pigeonhole”?
I had been doing lot of work with the UK’s DJ Format at the time, and although I really enjoyed it and loved the music we were making, I also started feeling fairly ‘pigeonholed’ by the media that, because what we were making together had a pretty distinct ‘old-school’ sound, that that was all I was about as a rapper. So, when it came time to do my own album, I wanted to show that there was more to me as an MC than just this one throwback, old-school aspect. And so I tried to come up with an album title that would also reflect that sentiment.

The rapper Edan recently stated that he’s “motivated by old songs the most, new school is cool but it doesn’t come close”. Souls of Mischief had something similar to say when interviewed on their opinion of Jay-Z’s claim that Souljah Boy is one of the best rappers ever. What’s your take on the whole old – new school relation?
I mean, at the end of the day, good music’s good music, regardless when it comes out! But, that said, on the whole, I do tend to prefer the sound of hip-hop that came out in the ’80s and ’90s more than most of the stuff coming out now.

What would be your most influential rappers old and new?
Well, gotta say Run-DMC, just because they (along with the Beastie Boys) were really my introduction to hip-hop, and sparked my initial love for rapping. And then there’s been tons of other artists who have influenced me since over the years: Saafir, Pharoahe Monch, Kwest tha Madd Lad, Breezly Brewin’, MF Doom, Edan, Action Bronson, etc. (really anyone who’s creative, intelligent, witty, and has a good voice & flows).

Does hip hop suck in 2013?
Nah, you just have to dig a bit deeper sometimes to find the good stuff is all!

Speaking of Edan, he’s on Formats latest release and you’re not? What gives?
Haha…you’d have to ask Format about that! No, think we both were just busy doing our own stuff when Matt was putting together his latest album. Plus we had spent a lot of years together, recording and touring, so think we both felt we needed a bit of a break. But we’re still on good terms (we’ll chat every few months and catch up), and think we’ll probably end up working together again at some point. 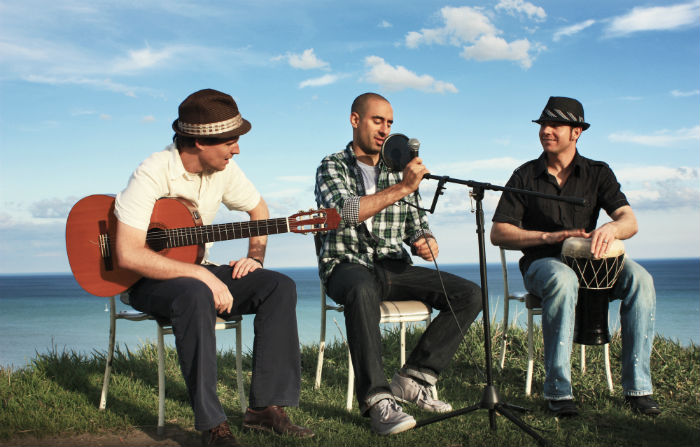 How did you hook up the Obliques and how did you decide to put out and almost acoustic album?
Decided to put a band together years ago, because I was feeling like typical rap beats were just too loud and fast for the themes I wanted to explore on my new album (wanted a mellower sound overall). Colin Kingsmore (percussionist) was just someone I had known around Toronto for years (he actually played on a tune on Escape), and Andrew Frost (guitarist) was a friend of a friend who I just immediately clicked with as soon as we started working together.

Was the song Courage planned for the album or did you and mom just kick it freestyle and then put it on tape?
Haha…no, it was definitely planned (ma wrote her raps beforehand and came to the studio for a proper session)!

You always rap about love and GFs, do you have any secrets in the courting department that you would like to share with all the lonely hearts out there?
Ha…most of my songs about love are actually about relationships falling apart, so maybe better not to take advice in that department from me!

What do you do when you’re not rapping or plugging Colonel Sanders?
Usually walking my two dogs, hanging with my girlfriend, or eating food that’s not good for me

Any collaborations you would like to see happening in the future?
Would love to work with a full orchestra at some point!

You seem like an awfully nice guy, do nice guys finish last?
Pretty much, unfortunately. But at least you can look at yourself in the mirror when you get home from finishing last!

When you coming to Zagreb?
Hopefully soon!